Management and Marketing Strategies for Schools 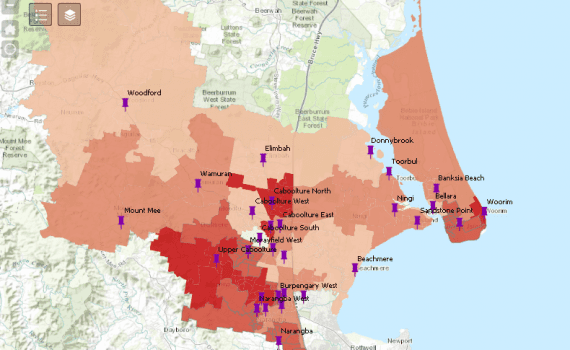 
The ADS team has prepared an exhaustive profile of by-election swings in Bennelong, New England, Longman and Mayo.

A full report of the swings and their implications for the 2019 election appears in the Weekend Australian.

Below is a link to the maps of the swings and the associated demographic drivers for Longman.

Click away and compare the swings to and from the major parties with key demographics in our statistical profile.

Divining votes all about swings and roundabouts at by-elections


Provided your humble correspondent is not eaten by a grizzly bear next week while trout-hunting in the wilds of northwest Canada, he will be back in time to help our team sift through the demographics of Super Saturday.

We will be looking for demographically driven swings across the booths in Longman and Braddon that are consistent with the swings we saw in New Eng­land and Bennelong; and tangible links between these patterns of swing and the policy offerings of the government and the opposition, especially as they relate to the hip-pocket nerve.

If we can see patterns among bigger demographic groups living in marginal seats then we can draw some inferences as to their impact at the next federal election. The other seats will provide a bit of a sideshow to the main event in Longman and Braddon.

South Australia’s Mayo, for ­example, is a seat a popular, local Liberal should have won back easily from former Nick Xenophon protege Rebekha Sharkie, who won Mayo from the less-than-popular local Liberal MP Jamie Briggs. However, polls show about 60 per cent of Mayo’s new generation of prosperous and professional commuters support Sharkie over the Downer dynasty’s Georgina Downer. After generations of political mulishness that has splintered the ­Coalition vote in South Australia — dating back to the original Liberal Movement — the Adelaide political establishment, like the old French aristocracy, learns nothing and forgets nothing.

The two West Australian by-elections of Fremantle and Perth will be interesting as a guide to how many intending Liberal voters, when denied a candidate, will vote for Labor over the Greens. Way too many to cancel the loss of Mayo, would be my guess.

Let’s look at what we know.

Last year’s by-elections in New England and Bennelong showed an average swing to the government of 1 per cent and a range of swings across the booths of about 12 per cent. The biggest swings against the government were in urban Bennelong booths dominated by progressive Left Sydney voters who hated having to vote yes in the same-sex marriage plebiscite and by conservatives who hated losing.

However, urban middle-class mainstream voters could not see what the fuss was about and quietly saved Liberal John Alexander.

In New England, Nationals flag-bearer Barnaby Joyce had his vote boosted by the big group of Howard battlers who had drifted back to Labor since 2007. We’re talking here about welfare recipients, tradies and hospitality workers living in rented accom­­mo­­­­dation in country towns where they can find affordable housing.

Battlers are also pretty thick on the ground in Longman in Queensland, a state where, in 2004, about one in seven electors voted for Labor premier Peter Beattie at the state election and then for Coalition prime minister John Howard eight months later at the federal election. This splitting of votes at state and federal elections is a characteristic of the Howard battler, a demographic that can be sentimentally supportive of favourite leaders but ruthless towards parties they regard as taking them for granted — especially with their Senate votes.

The trick for politicians is to match the sentimental rhetoric with what these voters see as their economic self-interest.

In Longman, they voted for Beattie because they saw themselves as Labor supporters and they voted for Howard because he stopped the boats, looked after their pensions and made the economy run on time. They had no problem holding what many commentators would regard as contradictory positions.

Plenty of Howard battlers are found in Braddon, where one in seven locals split their primary vote in the last state and federal elections. In mid-2016 the federal primary Liberal vote was 41.5 per cent for MP Brett Whiteley, but the primary vote for state Liberal candidates in March this year was 56.1 per cent.

In Longman and Braddon, polls are showing an average swing towards the Coalition of about 2 per cent, meaning both seats could go either way next Saturday. This is broadly consistent with the 1 per cent average swing to the government in New Eng­land and Bennelong, perhaps even a slight improvement for the Coalition.

Given some of the economic difficulties facing the federal government, compounded by its gaffes, even a small swing to the Coalition on its 2016 figures in these two seats would be exceptional, especially considering that Labor’s new MPs in Long­man and Braddon would have seen their vote rise by a couple of per cent since 2016 because of the personal vote benefits of ­incumbency.

Any opposition should comfortably win by-elections in seats it already holds. It should come close to winning more marginal seats like Bennelong.

Hopefully the demographic range of swings across the booths in Braddon and Longman will shed some light on why the opposition is underperforming and tell us what this could mean at the federal election due before the middle of May next year.

Like my Canadian trout taking a breather in a deep pool on their upstream spawning run, taxpayers tend to concentrate in income tax ranges just below a big jump in their marginal tax rate, so we’ll check the reaction from working voters who aspire to earn more.

We will see if we can discern any impact from the reductions in dividend imputation for retirees, although this one could be messy in practice.

With this sort of research, we go where the evidence leads us and we could see, for example, some impact from the campaign run by Catholic education against some of the federal funding ­reforms, which would be easy enough to measure given the ­detail in our education database.

We may see some increased support for the government’s quiet cuts in immigration, which would show as an increased vote for the Coalition among the huge mainstream groups of English-speaking and Australian-born. It’s pretty hard to lose an Australian election when you’re getting a swing towards you from Australian-born voters.

My working hypothesis is that Labor is making gains among younger, professional voters, ­especially those benefiting from the opposition’s big spending promises on new jobs in health and education.

We find these voters in the high-priced houses of the inner cities, the city seaside suburbs or bigger blocks with a view in the outer suburbs. But the Liberals should be able to withstand this sort of movement in what are typically their more comfortable urban seats, unless they repeat the mistakes of Mayo.

Labor is also making gains in Sydney and Melbourne among some conservative, non-English speaking migrant groups living in safe Labor seats, who respond well to big-spending promises as they are direct beneficiaries. However, these gains in votes by Labor often don’t bring commensurate gains in seats.

The Coalition seems to be still going well among middle-class, Australian-born families in mainstream urban areas and among Howard battlers in the middle to outer suburbs and in some pro­vincial city-rural seats. This is not the picture of a comfortable Labor majority, either in votes or in seats.

Roll on, Super Saturday, and I’ll report back if the bears don’t get me first.

GIS in the Classroom

What Generation Z Wants from Work, Where

The Trouble with Chocolate

GIS in the Classroom

What Generation Z Wants from Work, Where

The Trouble with Chocolate